How the Barker and Addicks Dams Work

The destructive power of water in the wake of Hurricane Harvey leaves billions of dollars of devastation along the Gulf Coast while record-shattering rainfall is testing the Addicks and Barker reservoirs on Houston’s west side.

Built by the federal government in the 1940s, before I-10 existed, before the city had sprawled that far west, these reservoirs remain essential to the region’s flood control system, but they are little understood.

How do they work? What are they designed to withstand? I talked to Richard Long, the natural resources manager at the U.S. Army Corps of Engineers, to answer these questions.

How the dams work

The reservoirs are designed to connect Houston’s watersheds and bayous that traverse across the region like the veins of a leaf and lead to Galveston Bay and the Gulf of Mexico.

South of I-10 is Barker Reservoir, fed by Mason Creek and upper Buffalo Bayou from the Katy Prairie, its origin, and continues toward downtown.

Long explained that the reservoirs have three main structural components. There are earthen embankments, which are the highest walls. The embankments are 121 feet high at Addicks and 112 feet at Barker.

Each reservoir also has a “gated water control structure,” or flood gate. It works like a heart valve, able to be opened and closed.

And each reservoir has two auxiliary spillways. The spillways at Addicks are 111.5 feet high, and they are 105 feet high at Barker. They are designed to back up the gated structures and work like the overflow holes in a sink, keeping water from going over the top or “overtopping” the embankments.

“We have designed the dams so that, in an extreme event larger the Harvey, water will go over the auxiliary spillway and never over the main embankment,” he said. “The dams are prepared for events beyond what we are experiencing right now.”

Additionally, both Barker and Addicks, which are designed similarly but are not identical, are undergoing a maintenance project. Two new gated structures are expected to be completed by 2020 with Granite Construction Company as the contractor.

“We are building new water control structures adjacent to the current [ones]. They are under construction. They don’t work yet,” Long said. The existing gated structures will hold up longer, he said, but for how long is not known. Once the new structures are working, the old ones will be decommissioned.

The new gated structures will have current technology and standards. “[They] will have similar water control capability, but will be more robust, more repetitive and more resilient,” Long said.

What they are designed to withstand

But Harvey has not been a normal storm. The amount of rain that has fallen could fill the Astrodome 3,200 times, said meteorologist Jeff Lindner of the Harris County Flood Control District (HCFCD). So much rain has necessitated the high-volume controlled releases of water from the reservoirs over the next two weeks.

The Army Corps is now faced with deciding how to handle the competing demands of upstream development and downstream neighborhoods along the bayou. 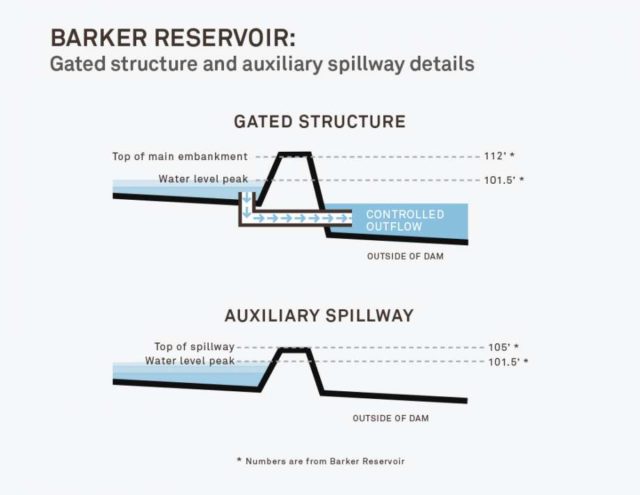 When overflow is activated at Addicks, it heads to Turkey Creek, Rummel Creek and possibly White Oak Bayou. At Barker, it would head to Buffalo Bayou, and possibly Brays Bayou and Oyster Creek. Barker also has two ditches, Barker and Clodine, surrounding it, acting as support arteries. They collect water outside the reservoir and carry it to the bayou.

Because Harvey has unleashed more than 50 inches of rain in a matter of days, the auxiliary spillways have had to come into use, Long explained. Inside Addicks, water is passing around the spillway. But not at Barker.

But once there is too much water on both sides of the dam, the flow is impacted. Further complicating matters, when channels like Buffalo Bayou fill up, water will look for all the other spaces it can fill up. And that is causing the serious issues that neighborhoods and homeowners are currently facing.

Thousands of people have been displaced from their homes near the reservoirs, as they were built on vulnerable property that lies in what Long calls “a gray area.”

Long explained that when the reservoirs were built, the federal government acquired a certain amount of land. At that time, the surrounding land was undeveloped. Historically, information sessions were conducted by the government as requested by private developers and homeowners. Public sessions were held when information was provided about the potential of water from the reservoirs encroaching on the surrounding land. But whether everyone who lives there now has been able to be fully informed is another matter. 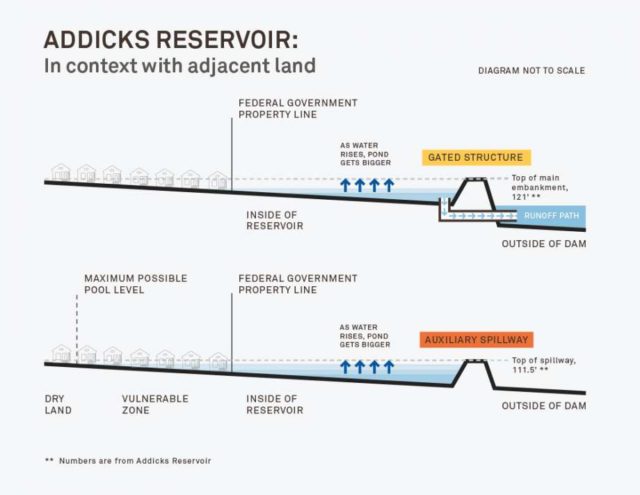 In short, the capacity of the dam is beyond the government property, and the Army Corps is handling a very complex emergency situation by controlling high-volume releases to protect the city as a whole.

“It has never flooded before above the property,” Long said. “This is the first time we have flooded homes located adjacent to and upstream from the property.”

Long, who has worked with the Army Corps for 36 years, unknowingly predicted this perfect storm that has sent so many along the Gulf Coast scrambling for dry land, safety and shelter. In the span of a week, Houston has shown the rest of America and the world what it is made of.

The city has come together in collective grief while maintaining its indomitable spirit. More than 50 people have died. But teams with inflatable boats and human chains have rescued those trapped amid swirling waters and many volunteers are sending surplus supplies to Beaumont and other ravaged communities. The storm is challenging us to co-exist with our watersheds, creeks, streams and, most importantly, Buffalo Bayou. Managing flooding is our city’s greatest challenge and biggest opportunity.

Editor’s note: This article was produced in collaboration with the Houston Chronicle.