That Time When I Met Harvey

Crystal Byers is a veteran high school English teacher and inspirational blogger. Raised in the Oklahoma panhandle, she remembers her dad saying, “Crystal, you can choose your attitude.” One day she started to believe him. Married with two adult children, Crystal and her husband Kody relocated to Houston one year before Hurricane Harvey. One year later, they have resettled into their reconstructed home.

I can’ lie. When I heard Dr. Crear’s voice on the overhead speaker after school on Thursday, August 24 saying, “Teachers, if you are still in the building. Please check your e-mail. The district will be closed Friday and Monday due to the approaching storm,” I felt the excitement of an unexpected snow holiday.

The night before, I took a trip to HEB for a few supplies, and the grocery store was a zoo. People clogged each aisle, food flew into grocery carts, and the shelves stood eerily empty. I joined the madness and grabbed what I could, stocking up with the rest of Houston. My friend Misti texted me that night, “Hey! Don’t you be playing with that hurricane.”

I thumbs-upped her text and responded, “I just made a grocery store run. It’s crazy around here. We are ready for whatever needs to happen.”

The next day I texted Misti again, “School has been canceled for tomorrow and Monday. I have a full tank of gas in case of an evacuation.”

She responded, “K. You can stay with me!! Ya’ll can leave early.”

Again, I texted, “It looks like we’re only getting the edge of the storm. We are here waiting for Harvey.”

I probably should’ve been, but I wasn’t scared. Amidst more concerned texts from more friends and family, the storm lingered in the Gulf and in the back of my mind. On my first hurricane-day-off, I focused on curriculum for the upcoming weeks of school. According to the local news, Harvey’s eye had narrowed on Corpus Christi, and emergency management officials advised Houston residents not to evacuate. Galveston and other coastal areas had mandatory evacuations, so we followed the plan to keep the roads clear for others. At home, Kody and I cooked and ate, watched movies and enjoyed the downtime. Soft rains fell that day, on and off.

Saturday proceeded in much the same way, except for reports of Harvey hitting east, north, and south of us, people losing power, and much more rain in the forecast. By late afternoon, soaking rains drenched our neighborhood, and water pooled in our yard. I stepped outside around nine o’clock in the evening, hearing voices on the street and realizing for the first time we had a situation. In my flip flops, I waded through water toward the end of my drive way and stepped onto the drier, elevated street. My neighbor Peggy from two doors down said, “Megan and Boaz have water in their house.” Megan and Boaz live next door between Peggy and me. I felt pressure in my chest, sick to my stomach, and an understanding in my mind that we could also flood in a matter of time.

I met another neighbor for the first time, an older man whose name I’ve forgotten but not his words. “I’ve lived here since 1960,” he said. “I’ve never seen anything like this.” I remember him shaking his head back and forth as he walked away toward his home. I considered his words along with the history of our house, also built in 1960 and never flooded.

I’ve witnessed a few rivers flowing through our neighborhood drainage system, a trench near the street, about 3’ to 4’ deep and up to 10’ wide, considering the slope on each side, and a culvert beneath each driveway. The water drains into Brays Bayou. I don’t remember saying any prayers that day, but seeing our overflowing trench, flooding our yard and drive and creeping toward our house, I prayed and prayed and prayed some more for the rain to stop.

Around 11:30 Houston Hobby reported 9.92” of rain over the past hour and a half. The rain relentlessly continued. I remained inside, staring through my front living room window and praying as flood waters rose. Finally, around 1:30, I called it a night, crawled into bed, and changed my prayer. “Please God, watch over my family and keep us safe.”

At approximately four a.m., my son Drew stood next to my bed, saying, “Mom, water is coming through the back door.” I followed him down the hall, through the living room, and into the laundry room at the back of the house, where water had seeped under the door and onto the tile. I peered through the back-door window to see water swirling over our deck and our entire back yard submerged. I opened the garage door to find the floor already under water. Through the front window, I saw water approaching the front-door threshold.

Returning to the bedroom, I relayed the news to Kody and started picking things up off the floor, starting with the shoes in the bottoms of our closets. Kody dragged out of bed to assess the situation for himself, and about that time water leaked in from the back of the house under the lower kitchen cabinets. He threw down some towels while I rolled my eyes and shook my head. Towels could not stop this flood. At the same time water began to soak up through the wood floors throughout the house, and Kody, Drew, and I rushed around moving everything we could think to save on top of countertops and beds and dressers and higher shelves.

By five o’clock the water inside was ankle deep. By that time, I threw some things into a waterproof shoulder bag in preparation for evacuation. I dried my feet with a towel and flopped back in bed, so did Kody and Drew. Not that I slept. I scrolled Facebook and my Nextdoor app for flood advice. More than once I read something along the lines of, “Turn your breakers off IMMEDIATELY! Do not wade through flood water with live electricity!”

“Kody?” I said to my husband lying beside me in the dark.

“I’m reading we need to flip the breakers. It’s not safe to walk through the water.”

Without questions or comments, Kody jumped out of bed and into action, sloshing down the hallway, through the living room, then the laundry room, and out into the garage. He shut off the power without electrocuting himself and through rising water found his way back to bed in the pitch-black darkness.

Once more we attempted sleep as Harvey poured hundreds of billions of gallons of rain upon Houston.* I found myself time and time again standing up on the bed, peering over the headboard and out the front window.

Somewhere around seven o’clock, I heard the beeping of a city dump truck and voices outside. I splashed through the water, now shin deep, down the hallway, into the entryway, where I opened the front door for the first time in about ten hours. As I stepped outside, the water now covered my knees. My neighbors gathered around the oversized flat-bed truck, manned by Houston firefighters, and I waded toward them. One of the first responders yelled, “If you want to come with us, we need to leave now.” Some of my neighbors already had a bag or two, some had their dogs, and some were climbing the ladder to evacuation.

Rushing back to the house for Kody, Drew, and our dog Rain, I said, “Throw some clothes in a bag and whatever else you need. Drew, what can I help you do?”

“I need my medicine.”

Drew faces his own hurricane. I call it hurricane of the brain. His doctors call it paranoid schizophrenia. His medicine is critical to his daily functioning, especially in times of heightened stress. “Thanks for helping me remember. My bag is packed. I’ll take it with me and tell the truck you and Dad are on your way.”

With my overloaded bag on one shoulder, I stooped to grab Rain, our wet chihuahua-terrier mix. She tried her best to swim, God bless her. Carrying my purse, bag, and dog, wading through waters I don’t care to describe. I yelled to Kody back in the bedroom, “Grab your cell phone charger, and lock the door.” 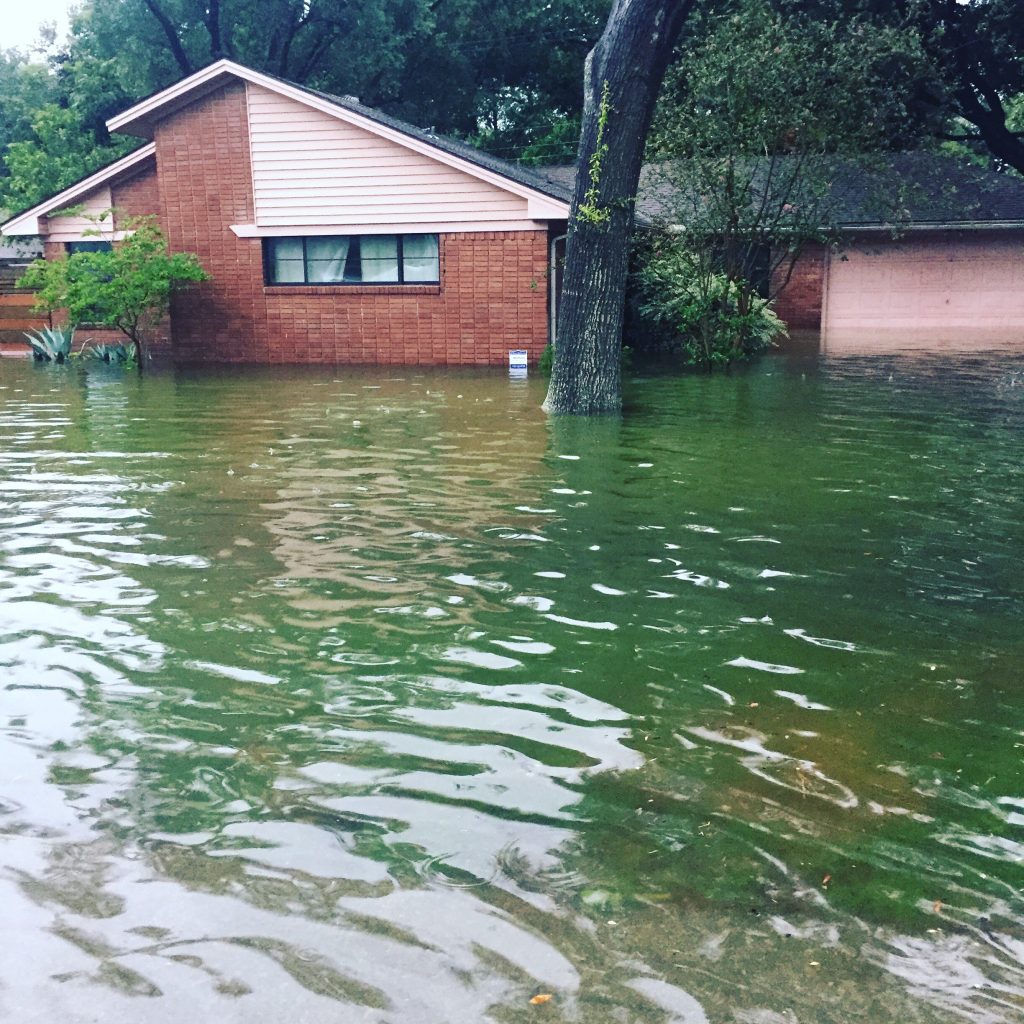 And that’s how we came to be rescued on a dump truck with sixteen people and seven dogs. Exiting our neighborhood, we turned north onto Fondren, formerly six lanes across, now a lake. On our route to safety, stranded vehicles collided like bumper cars in our wake. Apartment residents on higher ground waved and cheered and videoed, as if we were a float in a parade instead of afloat in a flood. A few short miles away, the Arena Theatre parking garage along with another fifty or so evacuees awaited a new group. Once there, the dump truck dumped us, and with our own cars left behind, we realized the next phase of the plan was in our hands or maybe in our feet.

I remembered the La Quinta. Less than a year before we were moving from temporary housing after our relocation from Dallas and into our Houston fixer upper. Our newly refinished wood floors needed a few days to dry before we could move in our furniture, and our temporary lease had expired, so for a few days we stayed at the pet-friendly La Quinta, not far from our house and a little over a mile away from the Arena Theatre parking garage. “Kody? What about the La Quinta.”

My man is a good man. He made the call, and the La Quinta had a suite for immediate occupancy at an amazing rate. In the meantime, the rain stopped. We grabbed our bags and our dog and started walking, me in my flip flops. The first half mile remained dry except for a few unavoidable puddles. The second half of that journey took place in the rain, not to complain. We made it—to breakfast and coffee and two dry, connecting rooms with two showers. My heart swelled with thankfulness, that spilled into my prayers, praising God for my family and dog, our safety and shelter, and all the small things including a dry change of clothes and shoes.

In the weeks after meeting Harvey, I’m not saying that I haven’t been sad. I’ve felt an overwhelming sense of loss. I’m not saying that I haven’t felt like screaming at the top of my lungs or strangling someone, anyone. Ask anyone close to me. I’ve phoned a few to talk me off the ledge. Yes, my family has lost much, and we’ll live in a hotel for a while, but things are replaceable, and we are safe and alive, and we still have each other. When my thoughts turn dark, I let myself feel those natural, human responses to crisis. Then I make a conscious effort to shift my mindset with some help from God. Then peace washes over me, and I feel a sense of hope, as though I hold the secret formula to life:

* According to The Times-Picayune on nola.com, “For the 48 hours ending at 11 a.m. Monday, Aug. 28, Harris County, Texas which includes Houston, measured an average of 23.7 inches of rain, which represents 732 billion gallons of water…that’s almost three times as much floodwater as was pumped out of New Orleans in the aftermath of Hurricane Katrina in 2005 by the Army Corps of Engineers.”

*On September 2, 2017, ABC News reports, “Harvey dumped 20 trillion gallons of rain on Houston alone….Cedar Bayou’s preliminary total was 51.88 inches. This sets a record for tropical cyclone rainfall in the continental U.S….According to the latest estimate from the Texas Division of Emergency Management, 185,149 homes were either damaged or destroyed by Hurricane Harvey and the resulting flooding. That number is expected to rise.”